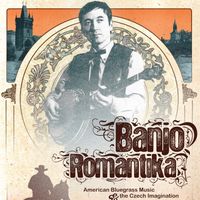 From the recording Banjo Romantika Soundtrack

"Top of the Tree" ( by Richard Ciferský) Performed by Richard Ciferský on his Průcha Diamond Point banjo. Recorded by Ben Bateson at the Down Home, Johnson City, TN, 2012. This composition by Richard is an example of the creativity, nuanced technique, and experience that make him a top banjoist in his native Slovakia, as well as in the US. As a member of the Czecho-Slovak band Fragment, Richard has toured all over the U.S., and as of 2016 is working out of Knoxville, TN with musicians Dale Anne Bradley and Jonathan Manness. This song is available on Richard's release Coming Back For More (Velvet Music, 2013).